This is the nineteenth issue of Voices From the Past. My goal for each issue is to publish some highlights of one of my historical stories as well as an update on my activities.

This is a new story of mine.

After watching the movie Julie and Julia, I decided I wanted to find out more about Julia Child. I discovered that I loved reading about her. The fascinating book My Life in France was written by Julia, with the help of a younger relative, when she was in her 90s. Appetite for Life by Noel Riley Fitch was also thoroughly enjoyable and thoroughly comprehensive, a biography written with Julia’s cooperation, but not subject to Julia’s approval.

Then I found many interesting anecdotes about Julia in the Summer 2005 issue of Gastronomica: The Journal of Food and Culture. (This issue, Vol. 5, Num. 3, can be ordered here under "BACK ISSURES ON SALE!".) It is a farewell and final bon appétit written by those who knew her best.

Here are some verbal snapshots of Julia’s life taken from this magazine.

Snapshot #1: Julia and Paul Child celebrating Julia’s 53rd birthday, 1965
This verse accompanied a mirror-and-lens device given to Julia by her husband Paul to help her put on her TV makeup. 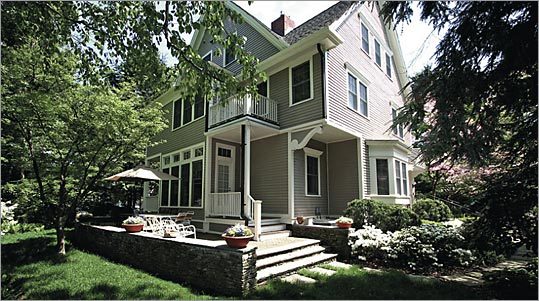 Snapshot #2: Julia giving out Halloween treats early 1970s
A neighbor wrote: “I was a financially strapped graduate student in Cambridge, trying to raise a family in the tenement for married students call Holden Green. It was cheek to jowl with decidedly upscale homes, include the large clapboard home of Julia and Paul Child.

If the kids went nowhere else on Halloween, they could not miss the annual pilgrimage to the Childs’ house. And they were never disappointed.

As with many New England houses, the Childs used the side door as the portal of choice. And in Julia’s case, the side door opened directly onto the kitchen. Halloween was the one time of year when we all had the chance to peek into the French Chef’s kitchen. We always hoped to smell something tantlizing whafting out from the kitchen. Julia would answer the knocks at the side door and gasp when the door was opened: “OH my, and who are YOU?” Parents, goggle-eyed but attempting to be cool, waited a few paces behind. But Julia, recognizing the adults’ agenda, always put two or three wrapped pieces of her homemade cakes into each bag.”

Snapshot #3: Julia taping a radio public service announcement for the National Audubon Society, 1971
SIXTEEN MICE! Twenty-four grasshoppers! One rabbit and five snakes. There! That’s a menu fit for a king – a king of the birds, that is. Our friends the hawks and owls feast on these little beasties and keep things in nature all ship-shape. So we want to be sure to have plenty of them around. This is Julia Child saying – Don’t shoot hawks and owls. Instead, wish them a Bon Appétit! Snapshot #4: Julia’s kitchen being installed at the Smithsonian, Feb. 2002
When Julia Child decided to retire to California in August 2001, she donated her Cambridge, MA kitchen and its contents to the Smithsonian. Everything was packed up and shipped to Washington DC. The cataloging of the over 1,200 items took place in front of the public in a glass-walled gallery, which later became the home for the exhibit called Bon Appétit: Julia Child’s Kitchen. One of the volunteers doing the cataloging reported:

“There’s been a huge flurry of publicity about the Museum’s acquisition of the kitchen and the public cataloging we are engaged in. The Today Show was in the gallery to record the unveiling of the six-burner Garland stove. Norwegian and Swedish journalists visited as well.

All day folks come up to the windows and watch what we are doing. Everyone has a story about Julia: her influence on them, a favorite recipe or TV cooking-show episode.”

So there are just four brief snapshots of Julia: as wife (the fairest of them all), neighbor (giving Halloween treats to children AND their parents), concerned citizen (on behalf of hawks and owls) and, for many of us, our beloved French Chef.

Here is some more information about Julia Child.

On Monday, July 8 at 4 pm, I'll be sharing stories of Julia Child: Cook and Nifty Wench at Wiawaka. Julia Child made French cooking accessible to American cooks, was the first person on PBS to win an Emmy, and enjoyed a passionate marriage. Come hear how this Smith graduate worked for the OSS during World War II, married a sophisticated man 6" shorter than herself, and taught millions everything they needed to know to produce delicious meals. Dinner following my presentation will be inspired by some Julia Child recipes:

Thanks for reading this issue. I’ll be sending you some more story highlights in a few months.

To sign up to get free copies of my future e-newsletters, please fill out this form.