Kate Dudding: Voices From the Past: September, 2006

This is the inaugural issue of Voices From the Past. My goal for each issue is to publish some highlights of one of my historical stories as well as an update on my activities. Please feel free to forward this e-newsletter to anyone you think might be interested. 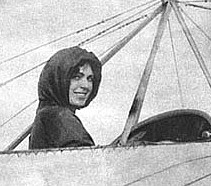 However, when Amelia Earhart was 14, and Charles Lingbergh was only 8, Harriet Quimby became the first woman in the US to receive her pilot’s license. The year was 1911. Lucky for us, Harriet was a New York City newspaper reporter who wrote about her flying experiences.

Here’s what she wrote about the flights she made which were part of her licensing procedure: “What did I think of? I thought more of my engine than anything else, for if it failed me I would be obligated to pitch my machine and glide down, a feat I had never attempted.

“What did I see? I saw the hangers at the field, the domes of Garden City in the background, a glimpse of the ocean at the south and Long Island Sound on the north. One who has not made an ascension can scarcely comprehend the clearness with which objects beneath the aviator can be discerned. The ruts in the road, a dog running across the road, the tops of the chimneys and almost every blade of grass are plainly picture below.

“How did I feel? I felt like a bird cleaving the air with my outstretched wings.”

The next year, Harriet became the first woman to fly across the English Channel. Unfortunately, she died in a plane crash 3 months later.

While not many people recognize Harriet Quimby’s name today, she was known in her own time. In fact, Harriet was one of Amelia Earhart’s heroes. After Amelia’s historic flight across the Atlantic in 1928, 16 years after Harriet’s flight across the English Channel, Amelia wrote:

“Without any of the modern instruments, in a plane which was hardly more than a winged skeleton with a motor, and one, furthermore, with which she was totally unfamiliar, to cross the Channel in 1912 required more bravery and skill than to cross the Atlantic today.

Always we must remember that, when thinking of the accomplishment of America’s first great woman flier, Harriet Quimby.”

This is only part of Harriet’s story. My full story includes Harriet’s own words describing her crossing the English Channel.

Here are some links to more information about Harriet.

What I’ve Been Doing

I’ve started recording my first CD: “Lighting the Way Home - Stories of Lighthouses and Their Keepers.” It will be released in November 2006.

For the first time, I told stories at The Clearwater Festival on Sunday, June 18. For more information, see http://www.clickitticket.com/concerts/clearwater-festival/ .

I’ve started research stories about one of my favorite things in the world – chocolate :-) Did you know that cacao trees only grow in rain forests?

Thanks for reading this first issue. I’ll be creating more story highlights later in the year.

To sign up to get free copies of my future e-newsletters, please fill out this form.